A competitive runner since 1989 at Stafford High School, and a coach since 1994, Clinton "Flash" Santoro has always been very involved in all aspects of running. A UConn grad, he specialized in the 3000m Steeplechase and went on to compete in grad school at Central Connecticut with a career PR of 9:03 and PRs of 8:26 and 15:27 in the 3000m and 5000m, respectively. In 1993, he finished 8th in the country at the USATF JO Cross-Country Nationals and in 1998 he was the silver medalist at the NEC Championships in the steeplechase.

In recent years, he has competed in Masters track and has won gold at the National Championships in a couple of events and has represented the US at the World Championships. Since the onset of his training, he has completed nearly 1,000 races.

As a coach, Flash led Rockville High School (Connecticut) to 3 consecutive seasons with only one loss, culminating in a Track & Field State Champions title in 1998. At Tolleson (AZ), he helped a talented group of coaches and athletes to earn a State runner-up title in Track & Field in 2003.  His runners swept nearly every position at each of the regular season meets. A fierce competitor as both athlete and coach, he boasts a record of 100 team wins, 3 losses in just 4 years of track. Ironically, he never stresses winning as part of the training, but his athletes always put forth their absolute best efforts.  A specialist in coaching mid to long-distance running and track events from 100m to the marathon, as well as hurdles and steeplechase, he has a plan for everyone.

Currently, he coaches a running group for all ability levels, which features speed workouts every Tuesday night. Starting April 2023, the dream to improve people's health takes another step, as the Arizona Jogging Club is launched.  Prior to that, he taught 7+ years of high school foreign language.  As passionate for language as he is for running and coaching, he is able to communicate with people in over 10 different languages.

His coaching philosophy revolves around the principle of hard work, realistic goal setting and positive thinking, where the word "can't" regarding effort is taboo. From his experience, he is well aware that natural talent can only take one so far and often results in lazy, uninspired, last-minute training. His belief is that hard work, (coupled with training smart, staying mentally focused/positive and being patient), always pays off. Running for him is not a regime nor is it the cookie-cutter "same training for everyone, every year." He is inventive and a master strategist, which he attributes to his high school coach, Steve Levinthal.

Flash's main goal is to inspire his runners to be lifetime athletes, stay healthy and enjoy all aspects of their sport, rather than be relegated to the sidelines. It doesn't hurt that they get much faster along the way, either.

Coach Flash has won several Masters National and World Track and Field Championships and has been consistently ranked among the world's best Masters steeplechasers for nearly a decade. Here, he is shown representing the United States in the steeplechase at the World Masters Athletics Championships in Lyon, France in 2015. 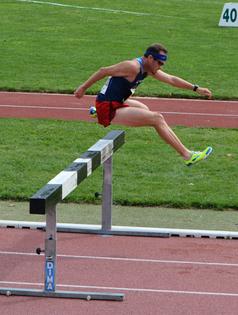